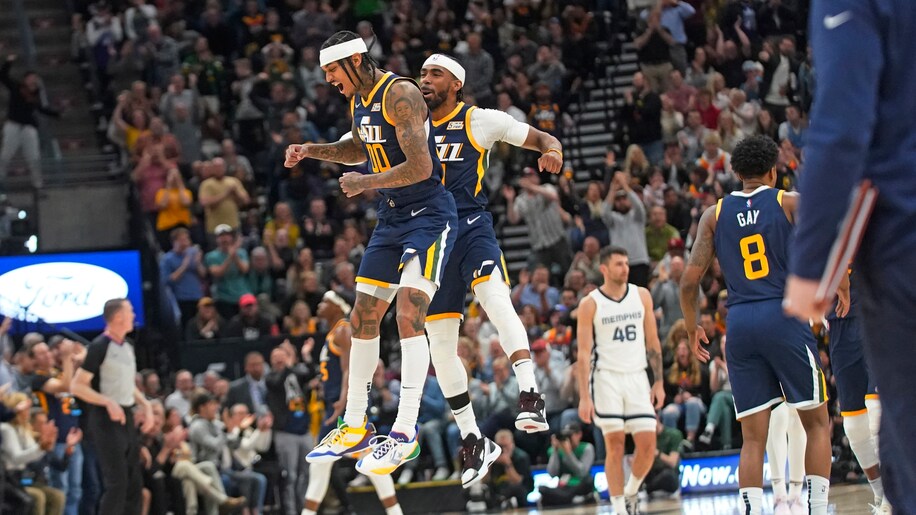 SALT LAKE CITY (AP) — Rudy Gobert had 22 points and 21 rebounds, and the Utah Jazz clinched a playoff berth with a 121-115 overtime victory over the Memphis Grizzlies on Tuesday night.

The Jazz won their fourth straight home game after holding Memphis without a basket for the first 4 1/2 minutes of overtime. This was a much-needed win for a Utah team coming off its sixth straight road loss, a game where it blew a 21-point lead to Golden State.

“A week ago, we probably don’t win that game, don’t win in overtime,” Gobert said. “There’s a trust and communication that we had, an intensity that we had down the stretch. You get a chance to win every night when you do that.”

Memphis played without its top two scorers. Ja Morant (right knee soreness) and Dillon Brooks (right hip soreness) were both inactive. The same injury has sidelined Morant since mid-March. Their absence didn’t stop the Grizzlies from producing big baskets as the fourth quarter wound down.

“For the most part, I thought our guys did a really good job against the No. 1 offense in the league,” Memphis coach Taylor Jenkins said. “We held our own.”

Jackson made a pair of 3-pointers in the final minute of regulation and Kyle Anderson put back Bane’s airball on a 3-pointer before the buzzer to force overtime. Mitchell went 1 for 2 from the free throw line with 5.6 seconds on the clock and the Jazz leading 109-108.

“After it goes to overtime, it would have been very easy to (feel) defeated,” Utah coach Quin Snyder said. “It was the exact opposite.”

Utah went ahead for good when Mitchell and Gobert scored on back-to-back possessions to help the Jazz carve out a 119-113 lead. Memphis scored its only basket in overtime on Bane’s runner with 27.5 seconds left.

“Resilience was good,” Jackson said. “Pushed it to overtime. We were good defensively. Offensively hit-or-miss, but that’s a good team.”

Utah built a 30-19 lead a minute into the second quarter after Clarkson and Mike Conley capped a 10-1 run with back-to-back 3s.

Memphis erased the double-digit deficit right before halftime. The Grizzlies tied it on a corner 3 from Bane and took a 50-48 lead on a pair of free throws from Jackson with 7.2 seconds left in the half.

Bane scored four baskets in 3 ½ minutes after halftime to help propel Memphis to a 68-57 lead. The second-year guard had 12 points in the third quarter alone. With Bane leading the way, the Grizzlies made six of their first nine shots in the second half.

Utah surged back ahead 91-83 early in the fourth quarter behind a 21-7 run fueled by three baskets and three assists from Clarkson. Danuel House, Jr. capped the surge with a four-point play and an alley-oop dunk.

Jazz: Clarkson beat the first-quarter buzzer with a reverse backdoor layup and Gobert beat the halftime buzzer with an alley-oop dunk. … Rudy Gay returned to Utah’s rotation after recording a DNP-CD in back-to-back games. Gay played 13 minutes and finished with two points on 1-of-4 shooting. … Conley had a team-high eight assists.

Utah finished with a 61-51 advantage rebounding advantage. Gobert matched his season high in his second straight game with 20 or more boards. Even with gaudy numbers, he was not a one-man wrecking crew on the glass.

Seven out of nine Jazz players who played collected at least four rebounds against a Grizzlies team that leads the league in rebounding.

“This is a team that historically is good at defensive rebounds,” Gobert said. “I thought we did a good job during the whole game of keeping them off the glass. It’s five guys, not one. It takes five guys to do that.”

The Jazz played just their second overtime game of the season, improving to 2-0. Utah also improved to 2-0 when tied after three quarters. The Jazz and the Grizzlies were deadlocked at 83 entering the fourth quarter.