FILE – Utah Jazz head coach Quin Snyder looks on in the first half of Game 4 of an NBA basketball first-round playoff series, against the Dallas Mavericks, April 23, 2022, in Salt Lake City. Snyder resigned Sunday, June 5, 2022, as coach of the Jazz, ending an eight-year run where the team won nearly 60% of its games but never got past the second round of the playoffs. (AP Photo/Rick Bowmer, File) SALT LAKE CITY (AP) — The Utah Jazz face an unexpected search for a new coach. Utah was prepared to enter next season with Quin Snyder at the helm until the head coach unexpectedly stepped down after eight seasons. The two sides had recently discussed an extension with Snyder, who still had two years left on his contract. They did not reach an agreement before Snyder decided to step away. “We have spent the last few weeks talking, Quin and I, a lot about a lot of different things. And I think it’s pretty clear, we desperately wanted him to stay,” team CEO Danny Ainge said during a news conference Monday, a day after Snyder announced he is leaving. “And at the same time, I’ve walked away

FILE – Utah Jazz coach Quin Snyder shouts to the team during the second half of an NBA basketball game against the Orlando Magic on Feb. 11, 2022, in Salt Lake City. On Sunday, June 5, 2022, Snyder resigned as coach of the Utah Jazz, ending an eight-year run where the team won nearly 60% of its games but never got past the second round of the playoffs. (AP Photo/Rick Bowmer, File) Quin Snyder guided the Utah Jazz to six consecutive playoff appearances, was an NBA coach of the year finalist just last season and won nearly 60% of his games with the franchise. And he’s decided that was enough. Snyder resigned Sunday as coach of the Jazz, ending an eight-year run of regular-season success but with the team never getting past the second round of the playoffs in his tenure. Snyder released a statement through the team, part of it simply saying “it is time.” “At the core, and what drives me every day is our players and their passion for the game, their desire to constantly work to improve and their dedication to the team and the Jazz,” Snyder said. “I strongly feel they need a new voice

Photos by Mic Sampson Photo Gallery sponsored by The Logo Shop, your source for teams, businesses and booster clubs. Visit http://welogostuff.mypromohq.com/ Click on photo to enlarge it, then use your left-right arrow keys to cycle through the gallery Source link

Blake Anderson leads the Utah State Aggie football team onto Merlin Olsen Field on Sept. 25, 2021. Photo by Clint Allen LOGAN, Utah – Utah State football will have nine more games nationally televised this fall as the Mountain West announced the remainder of its national television package Thursday. Utah State will have four games televised by Fox Sports, including three at home on Merlin Olsen Field at Maverik Stadium, three games televised by CBS Sports Network, including two at home, and one road game each on the SEC Network and ESPN. During the non-conference portion of its schedule, Utah State will open its season on Fox Sports 1 as it hosts Connecticut on Saturday, Aug. 27, at 2 p.m. USU will then appear on the SEC Network the following weekend as it plays at Alabama on Saturday, Sept. 3, at 5:30 p.m. (MT), while its in-state game at BYU will be televised on ESPN on Thursday, Sept. 29, at 6 p.m. Seven of Utah State’s eighth MW games will be televised on either CBS Sports Network or one of the Fox Sports Networks. In all, Utah State will have three games broadcast nationally on CBS Sports Network, including its conference

LOGAN – Utah State University’s Club baseball team has earned a trip to the National Club World Series starting this week at Dolny Stadium in Greenwood, South Carolina. The Aggies clinched the Northern Pacific Regional Title last week with a 5-3 victory over the Oregon Ducks to qualify for the national tournament. By virtue of their 23-3 record and the regional championship, the Aggies are the #3 seed and will play in the tournament’s opening game Friday, May 27 at 10:30 a.m. Mountain Time against the sixth seeded Michigan Wolverines. Head Coach Jake Anderson, a first baseman on USU’s 2014 team that played in the nationals, thinks the Aggies might be the tournament’s best overall team with a 10 runs a game average, outstanding pitching and solid defensive play. The upcoming series will mark the final week of baseball for the team’s four seniors, Kesler Nelson, Jacob Pullen, Baden Rawlin and Wyatt Sorenson. Because USU baseball is a club sport and is not a school-sanctioned team, players have to fund everything from uniforms to game travel, including the trip to South Carolina this week, they are currently fundraising for the trip. Those wishing to contribute can do so via Aggie Funded. Games will be live streamed

Utah State faces Boise State on Merlin Olsen Field on Sept. 25, 2021. Photo by Clint Allen LOGAN, Utah – For the second-straight season, Utah State’s football game versus Boise State will be nationally televised on CBS as the Mountain West announced a portion of its national television package Wednesday. Utah State’s MW and regular season finale at Boise State will be televised on CBS on Friday, Nov. 25, at 10 a.m. The matchup will mark the second-straight season the two teams have played one another on CBS in a mid-morning kickoff. Utah State, the defending MW Champions, opens the season with three straight non-conference games as it hosts Connecticut on Saturday, Aug. 27, plays at 2021 national runner-up Alabama on Saturday, Sept. 3, and hosts Weber State on Saturday, Sept. 10. After utilizing its first bye of the season, Utah State starts conference play at home as it hosts UNLV on Saturday, Sept. 24. Following its league opener, USU will conclude the non-conference portion of its schedule with a road game at BYU on Thursday, Sept. 29. Utah State then returns to MW play as it hosts Air Force on Saturday, Oct. 8, in its only home game of the

Utah State quarterback Logan Bonner (1) drops back to pass as Utah State linebacker Tyson Chisholm (43) rushes in the first half during an NCAA college football game for the Mountain West Conference Championship, Saturday, Dec. 4, 2021, in Carson, Calif. (AP Photo/John McCoy) COLORADO SPRINGS, Colo. – The Mountain West announced Friday that beginning with the 2023 season, the league will eliminate its two-division format. The two teams with the highest Conference winning percentage will compete in the championship game. The enhanced structure will ensure the top two teams meet in the championship game and put the Mountain West in the best position for a place in the College Football Playoff. A scheduling model and tiebreaking procedures for future seasons are being finalized and will be announced in the coming weeks. “Our membership has been working on concepts since last summer, as part of our strategic planning for the future of the Mountain West,” said MW Commissioner Craig Thompson. “A single-division approach provides maximum flexibility to adapt the Conference schedule as the landscape continues to evolve, while also allowing member institutions to play each other more frequently.” The MW will continue with its existing Mountain and West Divisions in

RT @dennisdoddcbs: Pac-12 play seems to be leveraging teams in expansion with certainty of media rights now instead of waiting for Big 12.…

@slbeesradio Man, that’s frustrating. Take the open base 150% of the time & make someone else beat you.

RT @USUBasketball: It will be HERE before you know it! Renew your 2022-23 Season Tickets today! 🎟➡️ #AggiesAllT… 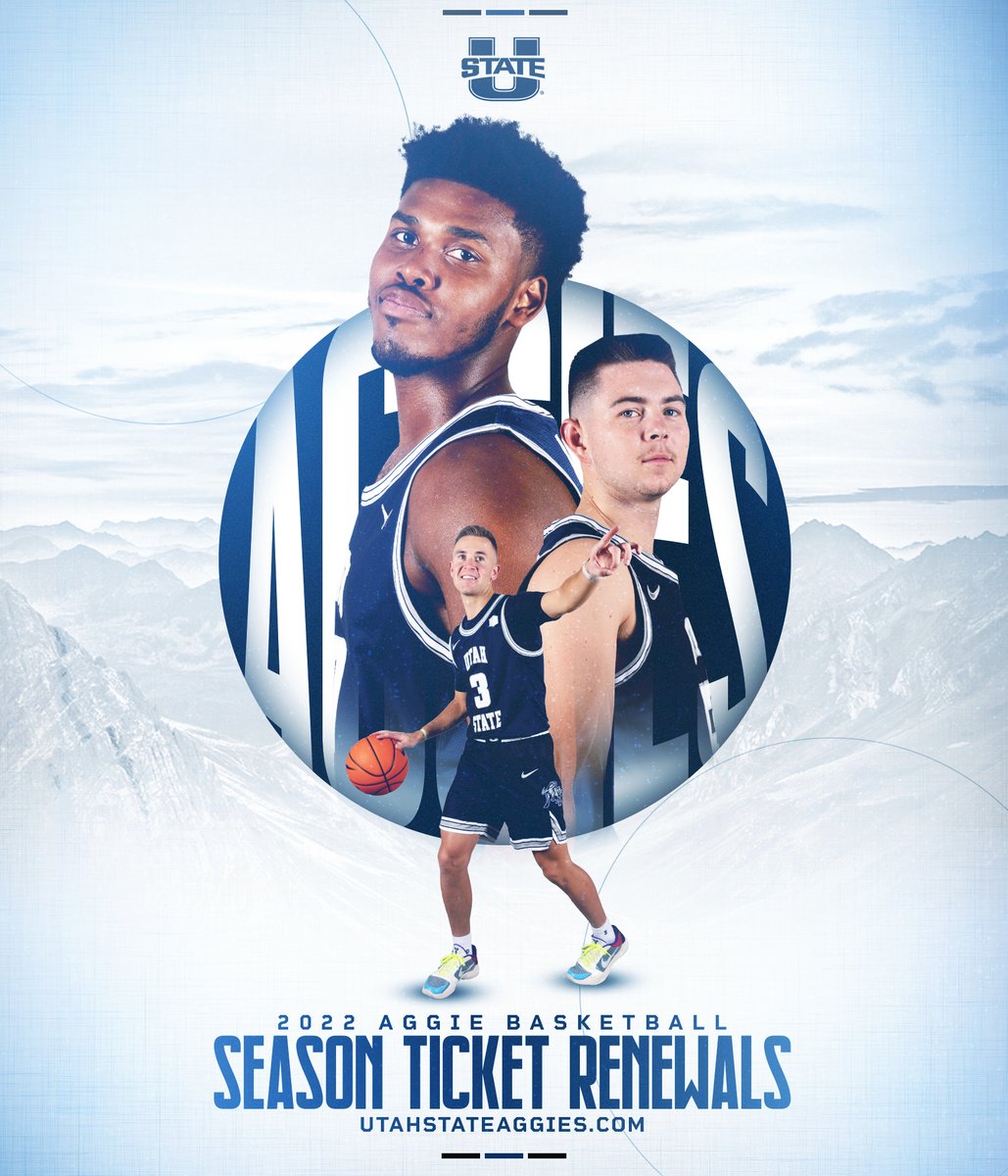