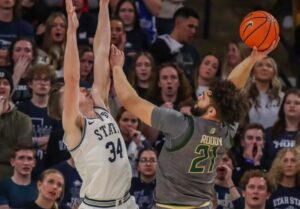 Boise State’s Leon Rice was voted Mountain West Coach of the Year after leading the Broncos to their first outright MW championship. Boise State went 24-7 overall and 15-3 in league play despite not having a player voted by the media to First Team. Wyoming’s Jeff Linder received the other three votes for league’s top coach.

The league champion Broncos had two players — seniors Kigab and Marcus Shaver — voted to the second team while Emmanuel Akot and Tyson Degenhart were honorable mentions, giving Boise State the most players recognized overall in the poll. Degenhart, a 6-7 forward, was also the unanimous selection for Freshman of the Year.

Voting was conducted independent of Mountain West oversight by media directly covering teams in all 11 league markets. In markets where more than one outlet covers a team closely, beat reporters from competing outlets submitted a joint ballot, giving each market one vote.

Voters ranked players 1 through 15 for first-, second- and third-team All-Mountain West with the top player getting 15 points and on down to the 15th ranked player receiving one point.

All vote totals are included for each selection. Voters are allowed, but not required, to publicize their own ballot.

Others receiving votes: none

Others receiving votes: none